This week: Luxury jeweller Links of London goes into administration putting 350 jobs at risk and Pizza Express hire advisers to help with its mountain of debt. Will Pizza Express drown under a mountain of debt?

In recent days, speculation has been growing about the future of one of the UK largest one of the UK’s biggest casual dining chains. Pizza express has a mountain of debt, totalling £1.12 billion which is equivalent to £1.8m per restaurant. The company urgently needs to restructure that debt if the company is to remain viable as in the last year the company turned over £543m, and of that £93m was paid out to cover debt repayment resulting in a £56m financial loss for the period. It was reported last weekend that the company was hiring advisers to assist.

The casual dining sector has been hit badly this year, and pizza express is facing competition on multiple fronts. Firstly, the dining sector in general is oversaturated, with the Italian/pizza sector arguably the most competitive. In the past couple of years many competitors such as Prezzo have had to trim back outlets and earlier this year Jamie’s Italian closed completely. On another front, diners are also increasingly choosing to use online delivery services such as Deliveroo and uber eats and these are taking a sizable chuck out of their margins. On top of this, restaurants have seen rising business rates and higher labour costs with the increases in the minimum wage. Ultimately, if the company is to survive, the debt needs to be restructured and reduced by closing unprofitable branches. 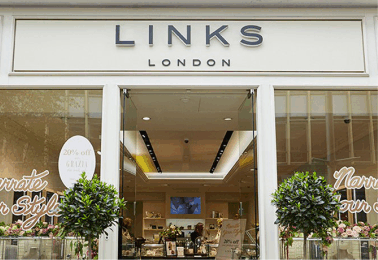 Links of London goes into administration putting 350 jobs at risk.

Links of London the Luxury jeweller headquartered in Mayfair has entered administration. The company employs around 350 people over their 28 store and 7 concessions in the UK and Ireland. The Administrator Deloitte have said that the stores will remain open while they attempt to find a buyer for the business, but the company’s website has been suspended.

Links was founded in 1990 when a London restaurant owner commissioned fish-shaped cuff links and had been due to celebrate its 30th anniversary next year. As well as cuff links, Links expanded to design and sell luxury jewellery, watches and gifts. In 2006, the company was sold Greek jewellery company Folli Follie, which was plunged into crisis last year over a fraud related to overstating sales. Links has struggled with difficult trading conditions, seeing sales fall 12% to £43 million and recorded a £20.5 million pre-tax loss in its most recently filed accounts for the year ending December 2017.

It is reported that the owners had considered a CVA (Company Voluntary Arrangement) to restructure or refinance and had also tried to sell the business, however they had been unable to complete a deal and ongoing cash flow pressures had left the directors with no option, but to place the company into administration.

Do you have concerns about your business? We can offer you a free consultation to discuss your options.