This week: Superdry predicting tough times ahead as it reports a £85.4m loss and Thomas Cook in £750m rescue deal talks with its largest shareholder. 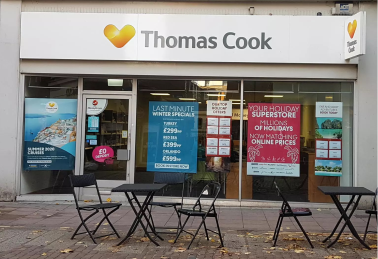 Struggling travel company Thomas Cook is in £750m rescue talks with banks and its largest shareholder, Fosun. The deal, which has not yet been finalized, could see Chinese company Fosun, take control of the firm’s package holiday business. Fosun, the Shanghai-based conglomerate also owns Wolverhampton Wanderers FC and the holiday resort chain Club Med.

Thomas Cook's chief executive, Peter Fankhauser said the outcome would “not be the outcome any of us wanted”, but when asked whether existing holiday bookings were safe, he said "Bookings were secure. They can book with us without worries. We have enough resources to operate our business so they can enjoy their holidays with us."

Thomas cook have blamed the increase in online competitors for intensified competition and that this had led to oversupply across Europe, forcing many tour operators to cut prices. This effect was also added to by last summer’s heatwave and Brexit uncertainty, which convinced many customers to stay at home.

Superdry predicting tough times ahead as it reports a £85.4m loss.

Struggling retailer Superdry has swung deeply into the red by reporting an £85m annual loss for the year to 27 April. On top of this loss. Superdry have warned that sales could also fall in the current financial year. For the previous year Superdry had reported profits of £65.3m.

Superdry founder Julian Dunkerton, who has recently returned to the firm, has said that he is trying to "steady the ship". Mr Dunkerton returned to the firm in April this year after a long and bitter row with the previous management, who he said had a misguided strategy. Mr Dunkerton said that he planned to return the brand to its “design led roots” and commented "My first priority on returning to Superdry has been to steady the ship and get the culture of the business back to the one which drove its original success"

The founder obviously has a plan, but will they use a CVA to reduce costs as many other retailers have this year?